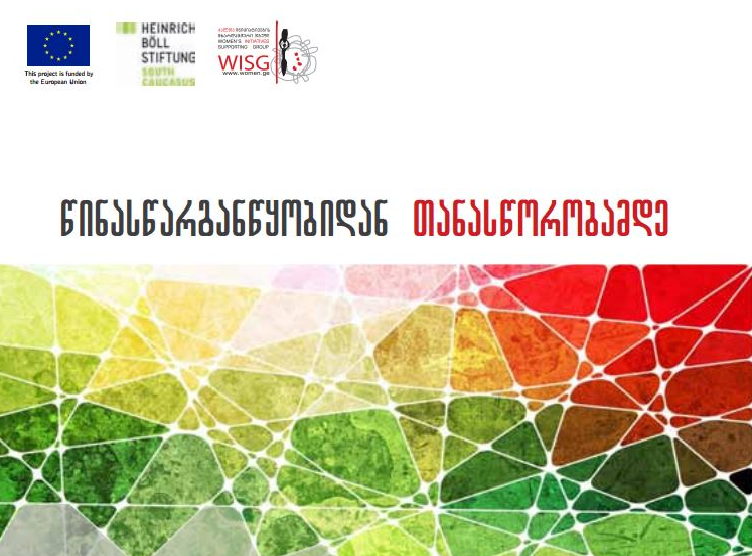 The study report - From Prejudice To Equality: Societal Attitudes, Knowledge and Information Regarding The LGBT Community and Their Rights - is prepared by Women's initiatives Supporting group (WISG). The report consists several sections and reflects the findings of a large-scale study of societal attitudes towards LGBTI persons in Georgia.

The study employed both quantitative and qualitative methods. Within the framework of quantitative study, 2,00 respondents were surveyed across Georgian cities and villages.

Quantitative research shows that negative attitudes towerds LGBTI group are considerably dominant in Georgia. respondents express more negative attitudes towards bisexual and gender non-conforming men than bisexual and gender non-conforming women. Attitudes towards lesbians and gay persons are equally negative. The present study shows that adverse attitudes towards lesbian and gay people have various predictors. The high level of aggression towards lesbian women may be attributed to the iconic role, function and understanding of sexuality prescribed to the woman in Georgian culture – it is this asexual archetype of the Georgian mother that lesbianism essentially violates, and, it is likely that this precipitates a higher degree of aggression towards this group.

Biphobic attitudes in Georgian society are stronger than homophobic sentiment. The higher level of biphobia is determined by bisexuality being perceived as a “fluid, unstable orientation”. In terms of transphobia, sex constitutes a significant predictor: men are more inclined to express negative attitudes towards transgender and gender non-conforming persons than women.

Negative attitudes towards select groups vary by village/town/capital, gender, age, level of contact/acquaintance with the LGBTI community, and level of knowledge about homosexuality.

Homo/bi/transphobic attitudes are largely determined by respondents’ perceptions of traditional gender roles, and the level of right-wing authoritarianism and religious fundamentalism (the degree of influence evidently varies among individual groups). Respondents ranking high on the right-wing authoritarianism and religious fundamentalism scales far more frequently exhibit negative attitudes towards LGBTI community members. The more rigid the respondents’ understanding of traditional gender roles, the higher they rank on the homophobia, biphobia and transphobia scales.

The present report has been compiled within the framework of the EU-funded action implemented by the South Caucasus Regional Office of the Heinrich Boell Foundation, which aims to contribute to the protection of and respect for LGBTI human rights in Georgia and Armenia. One of the primary objectives of the action is the development of a long-term evidence-based advocacy strategy, which would be conducive to a gradual and effective reduction and ultimate elimination of homo/bi/transphobia within all societal levels.

The study can be found and downloaded at the following link: From Prejudice To Equality: study of societal attitudes, knowledge and information regarding the LGBT community and their rights.