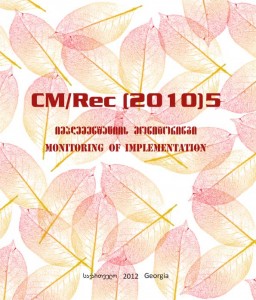 On 31 March 2010 the Committee of Ministers of the Council of Europe adopted its Recommendation to member states “on measures to combat discrimination on grounds of sexual orientation or gender identity” – CM/REC(2010)5. The Recommendation is the world’s first international legal instrument dealing specifically with discrimination on these grounds.

a) It emphasizes the key principle, that human rights are universal and apply to all individuals, including therefore LGBT persons;

b) It acknowledges the fact of the centuries-old and continuing discrimination experienced by LGBT persons on ac­count of their sexual orientation or gender identity;

c) It recognizes that specific action is required to ensure the full enjoyment of human rights by LGBT persons, and sets out the measures required of member state governments.

The purpose of this report was to assess what progress has been made by Georgian authorities in implementing the Recommendation, and to highlight the areas were further action is needed. By documenting which measures have, and which have not been completed, it provides a base line against which to measure further progress in implementing the Recommendation in the coming years.

The report has two main target audiences. First, at national level, the political leaders and civil servants who are responsible for implementing the recommendation. And secondly, the Committee of Ministers of the Council of Europe, which agreed, on adopting the Recommendation, that it would conduct a review of progress towards its implementation in March 2013. It is intended that this report will contribute to that review.

Extended English version of the report with response letters and full case details can be found at the following link.