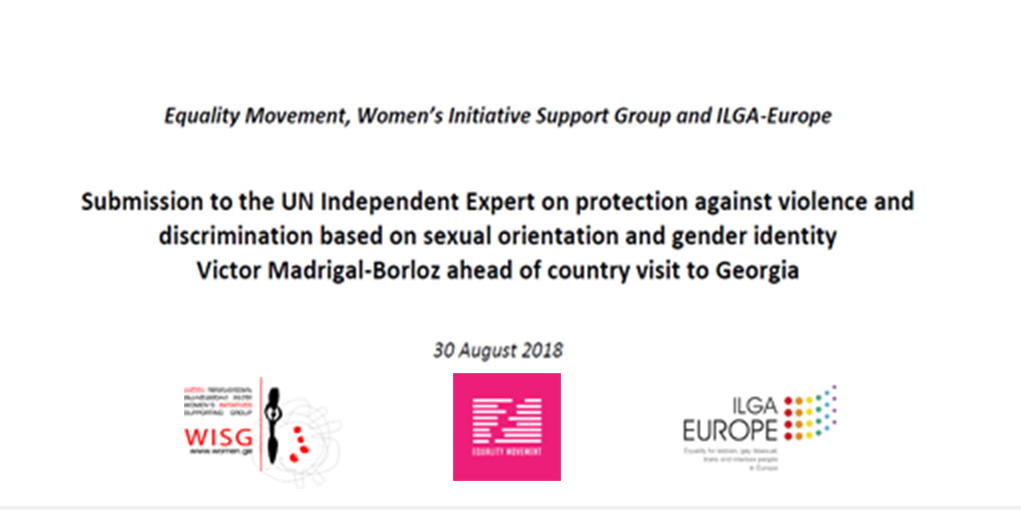 NGOs Equality Movement, WISG and ILGA-Europe welcome the upcoming visit of the UN Independent Expert on SOGI to Georgia and take this opportunity to raise key issues faced by the LGBTI community in the country.
Georgia is ahead not only of its neighbours in its legal protections of the human rights of LGBTI people. Georgia has been striving towards closer ties with Europe, and this determination has led to improvements in the human right situation overall, and also in particular the human rights of LGBTI people, which is highly commendable.

However, despite the existence of anti-discrimination legislation including on the grounds of sexual orientation and gender identity, as well as a number of other protections which specifically mention sexual orientation and gender identity, discrimination and violence against LGBTI people persists and implementation of existing legislation is lacking. Surveys of public opinion[1] also show prevailing negative attitudes, highlighting the gap between legislation and reality on the ground.[2]

Despite the existence of relevant legislation, as well as recommendation made to Georgia by different international bodies, including within the United Nations,[3] lack of implementation makes increasing transphobic and homophobic violence, prevalent hate speech, lack of access to true freedom of assembly for LGBTI groups, and barriers to legal gender recognition topics of particular concern.

1 For example, according to a national survey among respondents of 14 to 29 y.o. conducted by the Friedrich Ebert Stiftung, 44 % of the respondents showed distrust toward LGBT persons and would not be happy if a homosexual person or couple moved into their neighborhood. See: http://library.fes.de/pdf-files/bueros/georgien/13150.pdf.
2 According to the official statistics in 2017 the motive of hate was studied in 86 criminal cases. The ground of sexual orientation was examined in 12 criminal cases and the ground of gender identity in 37 criminal cases. On the other hand, cases documented only by WISG on the ground on SOGIESC in 2017 hit 105, including threat/blackmailing (5), violence (6), beating/bodily injury (7), domestic violence (7), harassment by the police (7), damaging property/stealing (6).
3 E.g. Human Rights Committee: Concluding Observations, Georgia, 19 August 2014, CCPR/C/GEO/CO/4, paras. 8-9; CEDAW: Concluding Observations, Georgia, 24 July 2014, CEDAW/C/GEO/CO/4-5, paras. 34(e)-35(e).